Well thanks to the folks over at Souls Team I got hooked on this game, its really fun and can be challenging sometimes, if you play the game already post your battletag below

We play on the european server by the way. 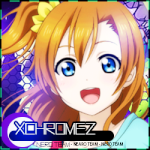