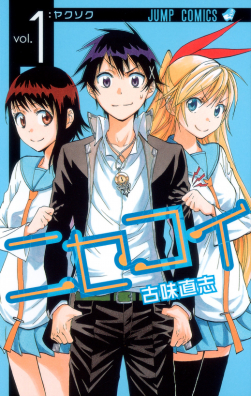 Raku Ichijou is an average high school student. He also happens to be the sole heir to the head of a Yakuza Family called the Shuei-gumi. Ten years ago, Raku made a promise... a secret promise with a girl he met. They promised one another that they will "get married when they reunite". Since then, Raku never let go of the pendant the girl gave him. Then one day, a beautiful girl named Chitoge Kirisaki transfers into Raku's class. Their chemistry was more than off. There was not a moment where they were not fighting. But by a weird turn of events, Raku and Chitoge agree to become fake lovers. Although his heart is really interested in his classmate Kosaki Onodera, Raku must continue pretending to be Chitoge's boyfriend.

2 Episodes out so far seems interesting ^^ 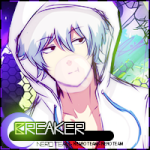 I read the manga and for me I was excited when I heard that it was going to be an anime. Though you come to notice that the colors are too bright. Pretty funny I have to say... Surprises me it is only going to have 12 episodes. Hmm... Second season maybe? or maybe not.

Spoiler:
Can't wait till they introduce his fiance, then it gets even better

The manga at the moment isn't going anywhere though.. but the anime is still a great adaption. They literally adepted it panel by panel. XD

I just want to hope they can create some kind of anime-only ending though for the never-ending plot that isn't going anywhere in the manga.