Story:
In Robotics;Notes, the player assumes the role of Kaito Yashio, someone who enjoys fighting games. He is in his school’s robot club. The story begins when the protagonist finds out that one of Robotics;Notes’ main heroines is actually a genius programmer who created the game engine for a world renowned fighting game. The main character then decides that he wants to create a robot based around command inputs and motion capture technology. He decides to go to the karate club to look for someone to perform the motion capture sequences.

My Opinion:
With the anime Zetsuen no Tempest, here are two good discoveries that will ensure good times in front of screens.

i really enjoy this anime, in a way it reminds me of Suzumiya Haruhi 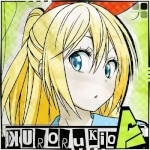 AkramRockeurz wrote:good Anime but i dont like it very much i think btoom is the best in this season

Btoom is a good anime too, yeah, I'll make a topic on this anime soon !

Where the f do you guys get the time to watch all these animes? xD But this one doesn't look too bad.